Why It's More Than Just Rocks on Paper

As woodworkers, we generally sand wood, finishes, and solid surface material. Sandpaper is broken into a couple of general classifications according to what it is going to be used on.

Performance and Price Are a Function of the Details

Aluminum Oxide – a sharp, block-like material. It has a characteristic that makes it unique among the various abrasive materials; as you sand, it constantly fractures and renews its cutting edges. This characteristic is called friability. Aluminum Oxide is also a very tough material, so the edges won’t dull before they fracture. This combination means that it stays sharp and cuts much longer than the other minerals. It is available in a large range of hardness, which means that there are Aluminum Oxides that are good for sanding finishes and others that work well for sanding paints/finishes or even solid surface material.

Garnet – a blocky natural mineral still used for some sanding applications. It is not friable and not very tough, so it dulls quicker and cuts slower than Aluminum Oxide. It tends to burnish the wood surface which can cause adhesion problems for some of the higher solids finishes.

Ceramic – the hardest of the common abrasives. It comes in shapes that can include blocks, wedges, or shards. Like Silicone Carbide, they do not fracture and renew their cutting edges when sanding wood, so they are not friable. Ceramics are extremely tough so they do not dull easily. Generally, you will find ceramics in coarse grits on cloth backers, usually in the form of sanding belts. 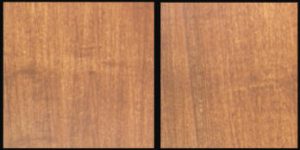 Sanded with a hard pad

Sanded with a soft pad

The scratch that sandpaper makes is a function of more than just the size of the grit. Manufacturers choose the backing material to augment the sanding characteristics of the abrasive mineral and grit that is deposited on it. The two factors that affect backer performance are stiffness and flatness.

Stiff backers will not let the grit flex under load, so they will cut very aggressively and produce deep scratches. Thinner and more flexible backers will allow the grit to compensate for the irregularities of the wood’s surface and will produce a smoother finer scratch. The softness of the pad on the sander can also produce these same effects. The flatter the backer the faster and more consistently the sandpaper will cut.