A Guide to the Spray Application of Waterborne Finishes

Many people have difficulty when switching to a waterborne finishing system. I think this is because they approach it like they would a solvent-based system, which will give mixed results at best. The first rule to remember when making the switch is that you are dealing with a water emulsion rather than a solvent solution so the entire chemistry dictates a different set of rules that you have to follow. With a better understanding of the fundamentals and how they relate to application techniques, it will make the transition easier and less frustrating.

Various resins, both man-made and natural, are selected for their particular performance characteristics: hardness, flexibility, scratch resistance, water resistance, and cost. Mixed in the proper ratio, they will give the desired properties for the finish.

There are three classes of solvents in a finish, and each class contains multiple solvents.

Latent solvents are solvents that, on their own, will not melt resins at room temperature. Instead, they are “activated” by the True solvents, increasing their potency. They are also less expensive than True solvents, thus reducing the overall cost of the finish.

Once mixed, the resins and solvents form a solution. This means that the resin is completely dissolved in the solvent, just like salt dissolves in water. When the finish is sprayed onto the wood, the solvents begin to evaporate. Each of the solvents evaporate at different rates. The solvents that evaporate faster, generally the diluent and some latent solvents, are the ones that “thin out” the finish so it can flow onto the wood. As these evaporate, the slower solvents (usually the True solvents) are left to melt the resins into a smooth thin film. Although temperature and humidity affect how fast this all happens, the whole process takes place in a relatively short period of time.

This sounds a little odd, but water-based finishes are actually formulated on a solvent-based platform. Glycol ether solvent is used because it is compatible with water, and will melt most acrylic and polyurethane resins. Another factor is that it evaporates more slowly than water. It importance of this will be shown later.

The basic waterborne finish can be defined fairly simply; Polymer resins are manipulated to form tiny droplets called latexes. They are dispersed in the water to create an emulsion. An emulsion is a liquid made up of unblendable substances. A good example of an emulsion is oil and vinegar. Then the coalescent solvent is added. Even though the process is relatively simple to explain, the chemistry involved is another matter. The polymers and water are not chemically compatible, so getting them to work together is quite complicated. Overcoming the issues of surface tension, ph, grain raise, and foaming are much more difficult than in their solvent-based cousins.

A simple explanation for the drying process is that the water evaporates and the polymers form a layer on the surface of the wood. At this point, the coalescent solvent is at a high enough concentration to dissolve or soften the polymers so that they melt together forming a thin smooth film on the wood.

As water evaporates the concentration of coalescing solvent increases

As the coalescing solvent evaporates, it melts the polymer to form a flat film 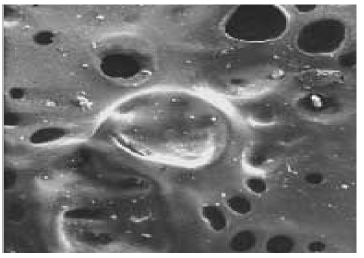 Finish right after spraying. Holes are atomizing air and solvents are evaporating 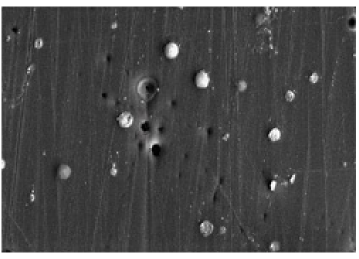 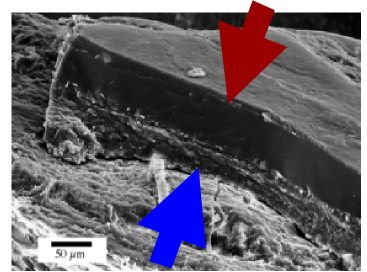 Waterborne finishes produce a coating that has excellent water and abrasion resistance. However, their Achilles Heel is solvent resistance. Remember that a coalescing solvent is used to melt the resins together when they dry. Although they are not yet up to the caliber of the best-catalyzed solvent-based finishes, the difference is becoming smaller with the introduction of pre and post-catalyzed waterborne products.

Manufacturers are currently working on a couple of issues that are keeping waterborne from becoming the standard in the industry. Clear waterborne finishes are almost perfectly clear. Also, they lay on the surface a little more than solvent-based finishes, so they tend to brighten the natural variations in the wood. This can result in a slightly more harsh or plastic look, although they are getting much better. Solvent-based finishes tend to soften these variations, resulting in a warmer look. Waterborne finishes are also are more weather-sensitive, but this can be overcome with application techniques. The sophisticated chemistry can add to the cost of waterborne finishes, but never use the dollar-per-gallon cost as your main criteria for the acceptability of a finish. Tighter health, environmental, and safety regulations are fostering an increase in waterborne research and use.